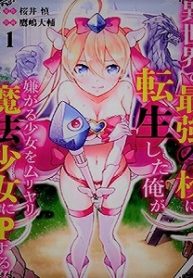 The protagonist, an egocentric man who’s led a successful life as the CEO of a company in modern society is murdered and reborn as a beautiful lady named Paril from a noble family in a fantasy world. Once he wakes up, (now in the body of Paril,) he finds out that he’s now in the body of an “inferior being” and that all his wealth, achievements and successful life have vanished. Therefore, he decides to rebuild everything from scratch and make it to the “top of the pyramid” in this parallel world.

Where is My Hammer?