18+NEW You Said Just the Tip 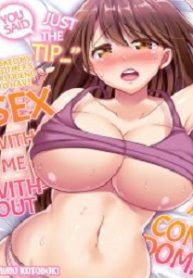 Description You Said Just the Tip: I Asked My Brother’s Girlfriend to Have Sex With Me Without a Condom!!: “You made three round trips already!” Mitsuki is my older brother’s girlfriend, and he often brings her to our house. I am always annoyed by the pantings that come from the next room, but one day on his day off, my brother has to leave for work all of a sudden, and here comes my chance to be alone with Mitsuki!! What if give it a try, kneel down, and ask her for it? What? It’s okay as long as I just touch her boobs!? I touch a girl’s boobs for the first time, and judging from her moans and expression, she doesn’t seem to hate it. I beg her for more. This time just the tip… but in the end, I go all the way in!! Mitsuki is so easy to persuade, so I’ll entreat her repeatedly until I cum!!

You Said Just the Tip